I'm involved in the International Quilt Challenge Group. Approximately every 2 months we have to complete an A3-sized piece for the group. For this challenge the theme was "Time".

The deadline was the 24th April, so I spent last night watching a football match and sewing my binding on.

For the background fabric I had an image of clock-tower from Graz, Austria. The piece was an experiment on transferring a photocopy using oil paints and gum arabic which I made about 3-4 years ago, and has been left bundled up in a scrap bin every since. It just shows that you should never throw any samples or textile experiments, they'll come in handy some day!! 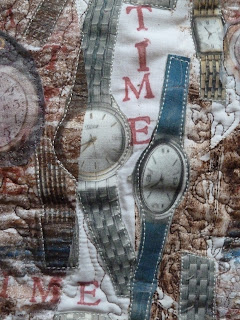 I then tried to find some clock or time-rel;ated fabric in my stash. Turned out that I nothing that I could use, so instead I gathered some watches from around the house (had to take some of people's wrists) and then just copied them onto fabric.

I didnt even scan the image into the computer - just copied it straight onto the fabric and paper. As another experiment, I didn't pretreat the fabric, just sellotaped a piece of white fabric onto the copy paper and sent it through the printer. I don't think the image would stand up to washing, but it worked fairly well for this purpose.
I then bondawebbed this piece of fabric and cut out the watches. These were then appliqued to the quilt top and edge stitched in white thread, which I thought outlined the watch shapes further.

Alphabet stamps were then used to add the letter "time" all over the quilt top. The phrase "time waits for no man" was also added to the piece.

After doing this, the piece was looking a bit bare so I decided to add some painted bondaweb. The bondaweb was painted with acrylic paints using colours that were already in the piece e.g. brown, blue, red etc.


Strips of the painted bondaweb were then added to the piece.


I also collected some images of old pocket watches off the internet and printed them onto a sheet of "Extra-organza". I bought a pack of it at Festival of Quilts a few years ago and finally got around to using it!

The piece was then machine quilted using a variegated brown thread and two fabrics were used to make the binding. 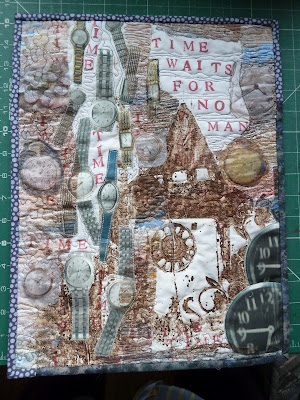 No finished projects to show at the moment, just seem to have a mountain of UFO's which I really have to finish one of these days.

I have a Japanese quilting book which had a pattern for a bag made out of hexagons. I started making the hexagons for the bag a long time ago, and just work on it occassionally. I finally finished the front panel last night, so just have to quilt it now.

But because it's taken me so long to make one bag front, I'm think I'm just going to put a plain back on it and applique on a few left-over hexagons.

I'm currently working a panel as part of a group project with the Genesis Quilting Group. The panels will be based on the theme of the Burren. I've just finished basting my panel, so will have to crack on and get the quilting completed by 13th May, which is the next time the group is meeting.
Can't show a photo of the panel at the moment, until the rest of the group have seen it, so here's a pic of some sample pieces, painted bondaweb that I've used in the panel etc.

I haven't had much time for crafting lately. About the only thing I've managed to finish in the past few months is this bag. I purchased the bag pattern from this website. 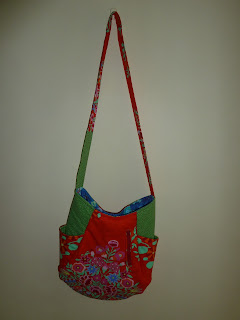 The bag is a very handy size, I'm planning on making another one in blue fabric when I get a chance.


Hopefully this weekend I can get around to finishing another project...
on April 06, 2012 No comments:

Claire
I'm a quilter based in the Mid-West of Ireland. Qualified Quilt Judge accredited by the Quilter’s Guild of the British Isles. 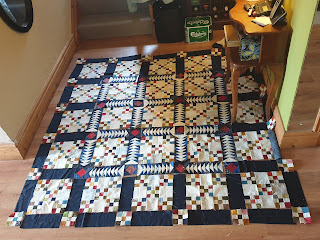